Advection fog is a type of fog. When warm, moist air moves horizontally across a cold surface, the air is cooled to the dew point, and fog forms because of it. Usually this occurs when the wind blows the moist air over a cold surface like the ocean.  San Francisco is a place where this type of fog occurs often…almost every day.    Here are three examples.  If you’re thinking that this looks like regular fog, the difference is how it is made. 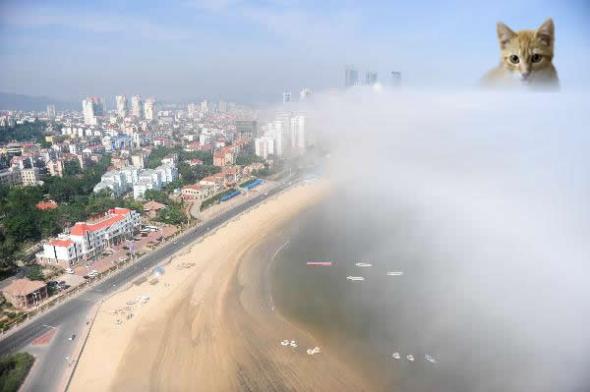 The cat that ate Beijing

Fog Radiating from the Earth

The most important things needed to make radiation fog are really wet soil, light wind, clear skies, and a low afternoon dewpoint. The more things that are present, the more likely you will see fog. Really wet soils continuously put moisture into the air, making sure the dewpoint depression (difference between temperature and dewpoint) will remain low. Light wind reduces the amount of mixing of air near the earth. If winds are light, moisture evaporating from the surface will remain near the surface and not mix with drier air aloft. If wind is calm, expect fog to be very close to the ground or not there. In a calm situation with a low dewpoint depression and moist soils, expect a thick dew or frost instead of radiation fog.

I know this is late and I’m sorry for that but I’ve been traveling a ton so my report is late but here it is!!! So I’ve herd that Philadelphia has had a ton of rain, actually record rainfall!!!

A record daily rainfall of 8.26 inches fell Sunday August 4th, at Philadelphia International Airport, said by the National Weather Service. The number had incresed overnight the total was 7.99 earlier. More than 7,  i’m not kidding , 7 inches fell in a a 4 HOUR PEIRIOD!! (To me thats a lot, but hey I’m young!!!)

That’s a lot!!! To where it passed the previous record of Tropical Storm Floyd, which was 6.63 inches. It was set in September 1999. On Sunday the 4th, of August, 8 cars were submerged in high water at the Eastbound lane of  I-76 at Kings Highway. Two humans were left stranded in a car in the middle of the street. Police said they were rescued I don’t know how. Thankfully there were no injuries!!! 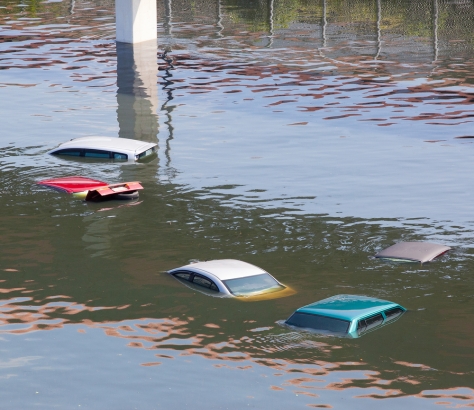 Cute Cat: I’m really sorry for the people in philadelphia

Cuteness:  Homes were flooded um peoples cars were washed away 😦

Hello everyone its Leah and right now there are 2 tropical storms. 1 in the Atlantic, 1 in the Pacific. First we’ll be talking about tropical storm Dorian.

Well I’ve been researching and Dorian is having a tough time.  Because there is a lot of dry air around the storm which is weakening the Dorian,  plus all of the vertical wind shear is taking its toll.  I’ve seen satellite pics over the past week and Dorian has lost form to its shape YAY!! for us!  Now tropical storm Dorian will not strengthen to a cat 1 hurricane.  According to the National Hurricane Center.

Now I’ll  show you tropical storm Flossie. The tropical storm is 770 miles away from Hilo, Hawaii and is traveling west at 20 miles an hour. 35 mph winds extend 175 miles out from the center, and is supposed to bring heavy rain.  It’s probably going to hit early afternoon Monday.  I’m letting you all know the track may change over a couple of days . 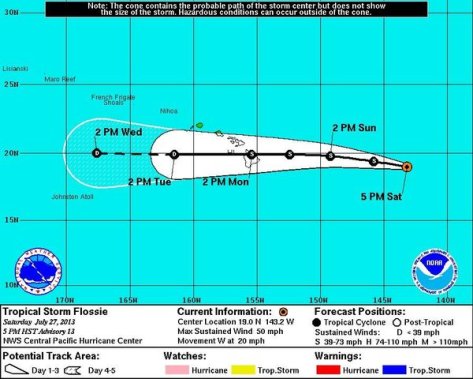 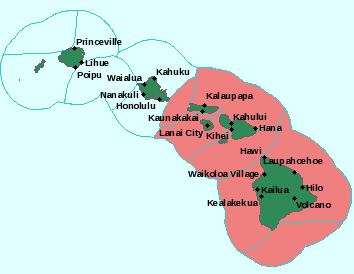 where its hitting Hawaii

Leah: No I did not know that Cute Cat thanks for telling me!! 😀

Cute Cat: You’re  welcome Leah!! Glad I could tell you.

The last few weeks have been very unusual for the US.  The western part of the US suffered from record high temperatures.  Triple-digit temperatures went as far east as Texas, with Corpus Christi shattering its all-time high with a reading of 107 Fahrenheit (42 Celsius). In Utah, Salt Lake City hit 105F (41C) at the airport, a record high for the date. On June 30th the temperature in Death Valley reached 129 degrees, a record for June.  The central US enjoyed much cooler temperatures than normal, while the eastern US got soaked.  All this was because the jet stream over the US changed from it’s normal pattern by dipping down to the Gulf of Mexico.

This week the jet steam is back to it’s normal pattern.  Hot temperatures have returned to the central part of the country. 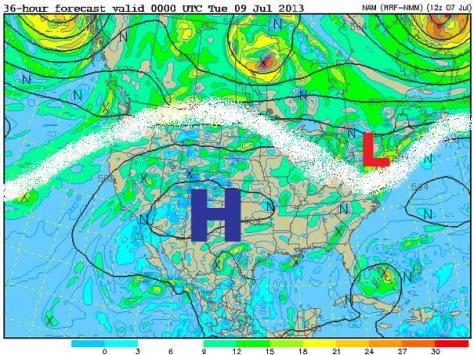 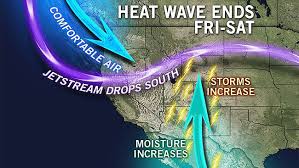 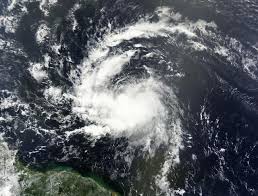 Chantal is not expected to turn into a big hurricane because the water temperature is not yet much over 80 degrees, so there is not enough energy to feed a big hurricane. And the a TS has to be over 65 miles an hour to become a hurricane.  Chantel is expected to just meet the rules for a hurricane for a little while before it moves into the cooler waters of the northern Caribbean. 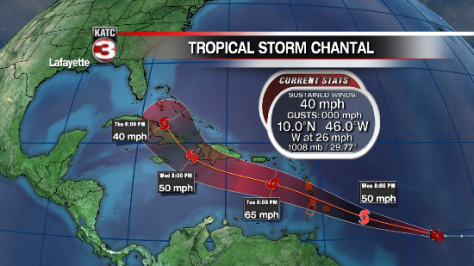 First I want to tell you what a derecho is, by the way in Spanish means (straight). It is a very long lived  intense wind storm. It can have winds of 58 miles and above. Though fairly rare, the last Super Derecho was on May 30 2012.  It started with a warm front and, the jet stream (fast flowing air currents) separating the warm air from the cold which is made instability around the jet stream. Those same conditions are present now.  That’s why weather forecasters are saying a derecho could occur, on Thursday or today (Wednesday). 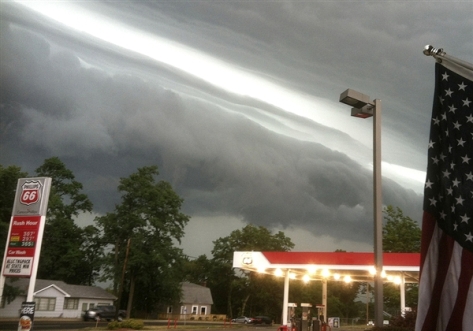 About 1 week ago there were 3 veteran storm chasers  killed by a EF5 tornado. It had a 16 mile path, 40 mins on the ground,and 2.6 miles wide in a matter of seconds, can you believe it broke the record. The old record was 2.5 miles wide  set on May of 2004. It had winds at about 295 miles an hour -wow! I need a chill pill! The tornado  hit at rush hour. When I heard about it I thought there would be more deaths than there were, but there were only 10 deaths thank you Lord! The tornado was south of El Reno. they believe it got to it strongest point at highway 81. They think it got up to 300 miles an hour! If the tornado had gone through a more populated area, the devastation would have been worse. (back to topic) The veterans names were Jim Samaras, Tim Samaras (the brother), and Paul Samaras (Tim’s son). How sad is that dad, brother, and son killed doing something they love ;( . They all lived in Colorado and, chased in the tornado ally. The Weather Service in Norman, Oklahoma said they did tornado research. 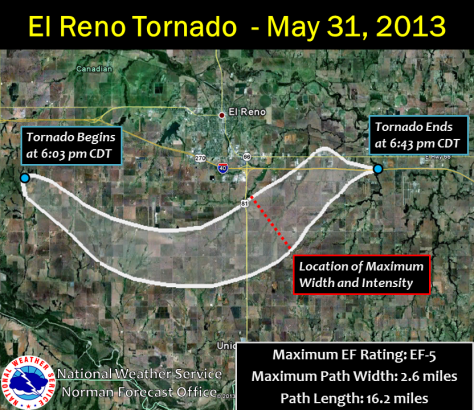 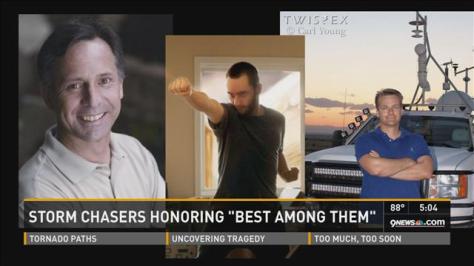 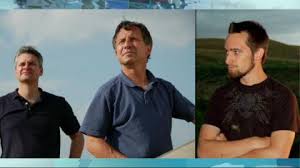 My partner has been gone and so i could not get a post done but now i can!!!!!

Did you hear about the Moore tornado? It was a EF4 or a EF5 tornado (someone said this then I looked at that: TOO CONFUSING!) Which means it was, 207-260 miles an hour or, 200 and above.  It had a 17 mile path, the number of homes that were destroyed were 13 thousand. Which meant a ton of people having to rebuild there lives.  About 240 people were injured and, about 20 deaths, 9 of those were children. That is so sad i can,t believe that there is something so cruel. The tornado was 1.3 miles long, a wedge!  God bless those people. 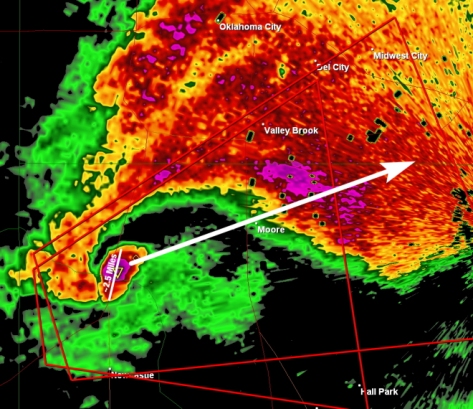 the storm the tornado came out of.

Pikachu  found a website called http://www.stormchasingmedia.com where you can watch live storm chasers on the road.

Did you know that different types of clouds can show you what weather is coming and how soon?

Knowing these signs can be very useful if you do not have a phone or TV on you.

For example: Cloud cover on a winter night means you can expect warmer weather, because clouds prevent heat radiation that would lower the temperature on a clear night. 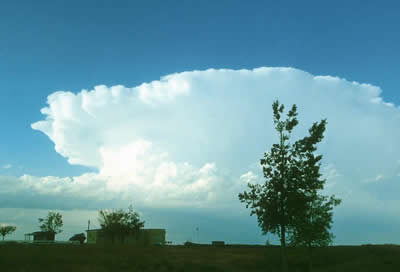 Cumulonimbus clouds that appear early in the day mean that ugly weather may be coming soon. 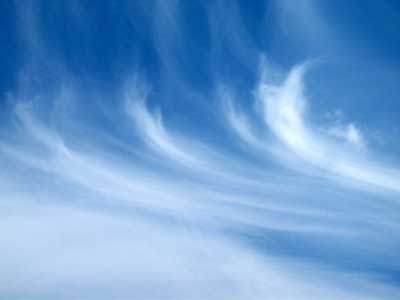 Cirrus clouds in the sky at very high levels usually mean bad weather in the next 36 hours.

Altocumulus clouds, which are like mackerel scales, also “mean” bad weather within the next 36 hours.   Mackerel skies and mares tails formations sometimes appear in the same sky. When that happens, rain is sure to follow the next day. I think that looks like a wave and I’ve never seen a mackerel.

A towering cumulous clouds means possible showers during the day.

Nimbostratus clouds mean rain is probably on the way.

For my  final presentation, my mascot is:

First of all, I’m sorry that we have not done a post in so long. I’ve been very busy and have also been sick for the past several days. Today we will be looking at Cumulous clouds which are one of the types of clouds you see below.  Cumulus clouds may seem boring but once you know about them they are not so boring.

There are 10 different types of clouds:

Cumulous are the regular fluffy clouds, sometimes big and sometime small. Actually there are 4 types of Cumulous clouds. They are:

Another view of a Cumulus Fractus cloud…this time by itself 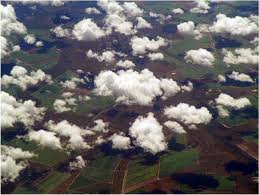 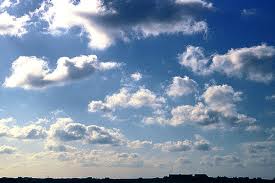 Cumulus meiocris cloud formation are the most common of all clouds 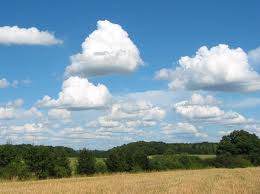 Another view of cumulus mediocris clouds 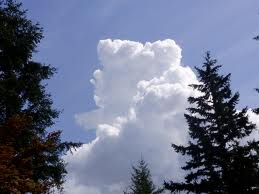